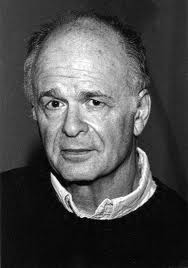 Johns Hopkins has the reputation for an excellent Creative Writing program and one of its major assets was the writer Stephen Dixon. Dixon was nominated two times for the National Book Award, first for his early novel Frog and later for Interstate. I mention this because it serves to frame my experience with Dixon.

Back in the ’90s I read my first Dixon piece, Interstate. I hated it. If you look back through my early postings it was prominent on my “Worst” list and remains there to this day, even though my opinion has changed considerably. Interstate is not the type of novel that Forster describes: even though you might find the appearance of a plot, or of characters, the narrative structure subordinates all those normal novelistic things and takes over the novel. Dixon tells a simple story of a father driving along with his daughter when another automobile creates a dangerous interaction on the road, a gun is brandished, a tragedy occurs or is about to occur … and then the father is driving along the road with his daughter but the circumstances are slightly different and when the second car arrives …

That’s the book:  a short narrative, altered slightly and repeated over and over. Maybe I wasn’t in the mood to have my literature-brain poked and nudged at that time because I remember hating this novel and agonizing my way to the last page. But for some strange reason, I read more works by this author and he rapidly won me over. I could see the value of the experimentation Dixon displayed in Interstate:  variations on a theme being more common in music but why not in writing too?

Back in the ’90s Barnes & Noble had a copy of Dixon’s other National Book Award finalist, Frog, and I was drawn to it every time I strolled though the store. Frog was small like a Golden Book but fat like War & Peace with a shiny silver finalist medallion stuck to its cover. Flip through the pages and there was that characteristic Dixon prose, page after page with no chapters, no paragraph breaks, long hairy sentences, and the sensation that reading this book would put a permanent crimp in my corpus callosum.

I eventually bought it but to this day I have not dared to read Frog lest something bad happen (other than warts). But last year I exchanged a few notes with a Bizarro author I admire and he admitted to bingeing on Dixon, for whom he had nothing but praise. He was looking for a copy of Frog to be his next read. I seemed to think the time had come so I took out my copy and placed it on the ready-to-read shelf where it spent another year or so waiting. Now that Frog is a selection of the Experimental Fiction group this quarter, I feel obligated to actually read it.

I started a few pages and it looks like I’m going to like it but it also looks like it will take some dedication to plow through almost 800 pages of tight prose and sparse punctuation. I think it will be worth it so join me in reading Frog with the XFX group.

Stephen Dixon has written many other books and collections of stories. Here is the list from Wikipedia: