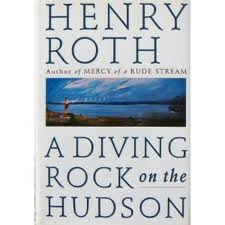 I commented on the narrative structure of Henry Roth’s Mercy of a Rude Stream but reading over that earlier post, I felt I had missed some of the layers of narrative and set to diagramming the structure.

This is an excerpt from the novel (A Diving Rock on the Hudson, page 245) which exhibits some of the narrative complexity:

In mid-July a letter waited for Ira when he came back from work … The first letter was from Cornell University congratulating him on having placed … for a scholarship to Cornell.

Henry Roth is writing the novel which has a somewhat traditional omniscient narrator. However, the fiction is that Ira Stigman is writing the novel relating his youth and, as was suggested, exploring the vitality he remembers from his you in contrast to his declining old age (young Ira discovers creamed spinach while old Ira takes another diuretic).

The narrative shifts to the old Ira commenting on the young Ira to his computer, which he has names Ecclesias:

The novel I can dispense with, Ecclesias. With M I can’t. …

——So now you’re reconciled to the course of events?

No. Not reconciled. Resigned perhaps, not reconciled. I want all my blunders undone, my lamentable choices annulled, a different itinerary through life, that would have bestowed Cornell, and M —— …

In other passages the old Ira speaks out to the young Ira, or performs the role of narrator (involved, not omniscient). Sometimes the biographical elements of the novel are spot on with the life of the author, Henry Roth, but at other times they are a fictionalization designed to make the narrative better but not necessarily more truthful.

When I read about Roth’s forty year writer’s block, I wonder if this fictionalized form of autobiography (more novel than memoir) helped the author overcome his difficulties writing. Then again, talking to a computer might be the trick.