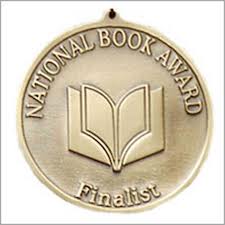 Over here in the politically challenged United States we have our own national book award called, conveniently, the National Book Award. What amazes me is that we have not as yet attached a commercial sponsor to the award: How does the Qualcomm Book Award sound? Maybe the EBay Book Award? The Red Bull Book Award?

Today the National Book Foundation announced the 2013 National Book Award finalists, with five nominees in each of the four categories: fiction, nonfiction, poetry, and young people’s literature. The winners will be named at a gala dinner and ceremony in New York on Nov. 20.

I’m not a big follower of book awards. In my experience, a minimally intelligent reader will naturally gravitate toward books which might be considered for some recognition … maybe not the same year as the award, but eventually. My other problem is that most book awards are far too subjective and easily half of the candidates are trafe, and although the other half might be deserving, if I ran the zoo the list would look very different indeed.

Here are the particulars for 2013:

Fiction:
The Flamethrowers by Rachel Kushner.
The Lowland by Jhumpa Lahiri.
The Good Lord Bird by James McBride.
Bleeding Edge by Thomas Pynchon.
Tenth of December by George Saunders.

Nonfiction:
Book of Ages: The Life and Opinions of Jane Franklin by Jill Lepore.
Hitler’s Furies: German Women in the Nazi Killing Fields by Wendy Lower.
The Unwinding: An Inner History of the New America by George Packer.
The Internal Enemy: Slavery and War in Virginia, 1772-1832 by Alan Taylor.
Going Clear: Scientology, Hollywood, & the Prison of Belief by Lawrence Wright.

Young People’s Literature:
The True Blue Scouts of Sugar Man Swamp by Kathi Appelt.
The Thing About Luck by Cynthia Kadohata.
Far Far Away by Tom McNeal.
Picture Me Gone by Meg Rosoff.
Boxers and Saints by Gene Luen Yang.