Man is a rational animal—so at least I have been told. Throughout a long life, I have looked diligently for evidence in favor of this statement, but so far I have not had the good fortune to come across it, though I have searched in many countries spread over three continents. On the contrary, I have seen the world plunging continually further into madness. I have seen great nations, formerly leaders of civilization, led astray by preachers of bombastic nonsense. I have seen cruelty, persecution, and superstition increasing by leaps and bounds, until we have almost reached the point where praise of rationality is held to mark a man as an old fogey regrettably surviving from a bygone age. All this is depressing, but gloom is a useless emotion. In order to escape from it, I have been driven to study the past with more attention than I had formerly given to it, and have found, as Erasmus found, that folly is perennial and yet the human race has survived. The follies of our own times are easier to bear when they are seen against the background of past follies. In what follows I shall mix the sillinesses of our day with those of former centuries. Perhaps the result may help in seeing our own times in perspective, and as not much worse than other ages that our ancestors lived through without ultimate disaster. …

Thus Bertrand Russell begins his not-to-be-missed 1950 essay, An Outline of Intellectual Rubbish. If you haven’t read Russell recently, and especially this one excellent piece, please do so without further delay. You might snoop around the internet and find a copy of this essay or it can be easily found in Christopher Hitchens indispensable selection of readings titled The Portable Atheist. 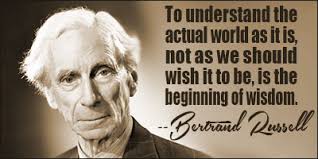 The current developments in the destruction of the American way of life—the American civilization—by the GOP, the Conservatives, and the hired-guns in the so-called Tea Party, make Russell’s essay even more apropos today than it might have been in 1950. Sure there was a lot of craziness going on after the war but at least then there was a concern for the continued existence of the United States of America (although I’d have to check more of his writings to verify that Russell was that concerned about America).

Ask yourself: What would Bertrand Russell have to say about American Exceptionalism?