When I was young and less opinionated (long, long ago and far, far away) I remember endless lessons in school for diagramming sentences. But by the time I grew into High School, sentence diagramming was losing favor. I understand that by the ’70s it was no longer supported by the institutions of learning but still secretly recommended by some rogue teachers. Don’t turn me in but I  still have a copy of a grammar book from the 1950s which includes a section dedicated to sentence diagramming. 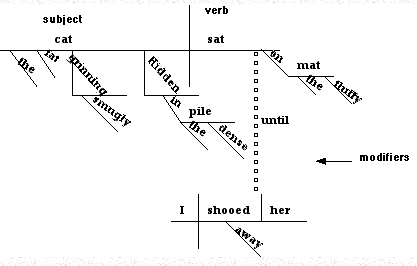 I loved diagramming and even if it was often a confusing task, it taught me a lot about the structure of sentences, despite the current evidence to the contrary in this Weblog. My daughter now teaches at the university level and often laments the inability of her students to even write a correct sentence in English. It seems to me that the loss of diagramming may have something to do with the demise of good writing in this country.  And, notwithstanding the debate between smelly old ink and paper books and digital books, we still need someone to write them … grammar and syntax matter.

So today I open (digitally, of course) my Slate and there is an article by Richard Hudson titled: “A Brief History of Diagramming Sentences.” Go to Slate for the complete article or for more information visit the author’s site on School Grammar.

What tools does a grammarian need? A brain helps, and so does a computer, but surely one of our most essential tools is some kind of diagramming system. How can we think about a sentence’s structure, after all, without displaying it visually? Geographers have maps; mathematicians have equations; composers have musical notation; economists have graphs; and grammarians have trees. …

The UK … started a big international campaign against all grammar teaching (with or without diagrams) in the first half of the 20th century. Unfortunately, America followed and the disease spread throughout the English-speaking world and beyond.

As we struggle to rebound from the effects of that disaster, it’s worth honoring Stephen Watkins Clark and his bubbles! Nearly two centuries later, where would modern linguistics be without him? And even more importantly, where would those countless generations of bright school-kids (and teachers) have found their fun?

Now go forth and diagram a sentence. Use whatever system you prefer: lines, bubbles, columns, trees, flowcharts, colored tooth-picks. Jump right in and grab a challenging sentence or two, maybe Molly’s soliloquy at the end of Ulysses?