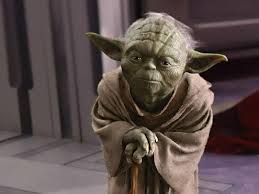 Skeptic is a great source of themes to keep you brains nourished and lively and often the subject is “The God Question.” In this article by Andrew Harter, the case for supernatural entities other than the Judo-Christian-Moslem-Baha’i God is made quite convincingly. Go to the Skeptic Magazine site to read the original article (and peek around at all the other goodies Skeptic brings to our often neglected critical thinking skills).

The Case for Yoda

The recent coverage in Skeptic … [I] unfairly neglected the debate over another supernatural entity—Yoda, the little green Jedi master who first appeared in The Empire Strikes Back. Cynics will immediately dismiss the suggestion that the existence of Yoda be seriously debated because he is clearly a fictional creation. However I propose that his apparent origin in the mind of George Lucas is actually further proof of his supernatural nature and all the more reason to bring the debate over Yoda to the skeptical forefront.

Yodists, those that believe in the existence of Yoda, and Atheiyodists, those that don’t (also sometimes called Trekkies), are divided into two very different world views. Yodists accept that the universe is guided by an all-encompassing energy that connects every living thing and every object. We’ll call this mystical force the “Force.” Yodists accept the idea that the Force works in strange and unimaginable ways. It guides us and controls us while giving us the power to choose between good and evil (the dark side of the Force.) Yoda is the greatest teacher there ever was of the ways of the Force. Atheiyodists deny Yoda because they are cruel, pessimistic people who have trouble accepting the wisdom of a short, green, big-eared entity that is so much more wise than they.

The first argument the Atheiyodists use in the debate over the existence of Yoda is that he is an imaginary character. They claim his origin as fictitious creation by director George Lucas, the alleged creator of all the characters in the Star Wars universe, is a widely accepted fact. However, what they are forgetting is that Yodists don’t dispute this. Yodists accept that George Lucas was the first person to “see” Yoda and to bring him to our attention. What the Atheiyodists are missing is that this was simply the way in which Yoda chose to reveal himself to us. By doing it in this manner he has given us a choice. We can merely believe that he is a puppet given life by the imagination of George Lucas and the voice of Frank Oz—or we can accept the greater truth that there always has been and always will be a Yoda who is all knowing and all powerful. Yoda used the cinematic experience to give us the opportunity to allow us the choice between Yodism and Atheiyodism.

While intense meditation has revealed to me all the proof I need, there are other examples that prove the case for Yoda. What would have happened if had Yoda appeared in any other movie than the Academy Award winning blockbuster The Empire Strikes Back? What if humans never developed the sense of sight or hearing? The Anthroyodic Principle shows us that if any of the conditions were just slightly off, there never could have been a Yoda for us to appreciate. The truth is that Yoda created these conditions so that we could learn from his wisdom in just the right atmosphere. The fact that in the movie he lives on a planet called Dagobah in a galaxy far, far away, is his way of telling us that even if conditions had been wildly different he still could have appeared to us—because he’s all powerful. Imagine if the principles of physics were slightly different and movie projectors were an impossibility? Or the physics was right but nobody ever bothered to invent a movie projector? What Atheiyodists would call “coincidences” a Yodist or any other reasonable person would admit was a miracle.

Atheiyodists are found of showing production stills and behind the scenes footage of The Empire Strikes Back and The Return Of The Jedi that show a Yoda puppet sitting lifelessly on a work bench or being animated by a person under a set. They say that this is proof that he is less than divine. What they haven’t let themselves appreciate is the fact that this is merely part of his plan. Yoda allows us to believe that he is merely a creation of Latex and foam rubber so that we can have the choice to believe. For those that want to live their lives spiritually bereft of the wisdom of Yoda, they can ignore the fact that on the screen the Latex and foam rubber transcend into something more spectacular. He becomes a living breathing being filled with the wisdom of the ages. This they cannot explain. Nor can the Atheiyodists tell us how it is that in a matter of a few months more people knew the name of Yoda and were touched by his wisdom than by any other spiritual figure in the history of mankind. …

I have meditated deeply and felt the way of the Force coursing through me. I have come to the understanding that Yoda is very real and a part of my life. Atheiyodists would do well to dispense with their prejudices and open themselves to the insights that come from within. Granted that these insights are very often flawed and that society never made any real advances until it began testing theories in the laboratory of the real world instead of the limited one in our heads. Obviously George Lucas’s survival can be looked upon as just the results of sheer probability. And yes, I admit that the Anthroyodic Principal is a rather silly argument and circular in nature because it takes for granted that we could no more argue our existence if we did not exist than a dead Christian Scientist can give testimony. But all of that doesn’t matter because when I close my eyes and reach my special place and ask the question “Yoda, are you there?” I hear a strange little voice that says “Yes, it is I that is here.” Yes, it is Yoda that is here. Away put your skepticism.

The Life and Opinions of Zacharias Lichter — Matei Calinescu