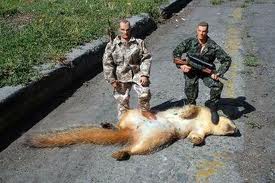 It happens often enough that the inherent humor in the event is no longer met with a smile but rather with a groan acknowledging the stupidity of the news source in question. Yes, too often the right-wing media (we won’t give any special treatment for Fox News since it has been shown to have a truthiness level at a seemingly high 19%) uses its bloated ability to fictionalize in a way that has them taking even the most outlandish and fake satirical news as being real and showing concrete evidence of what their own fiction and lies has been saying all along.

In the past few months we have been treated to many horror stories caused by the Affordable Care Act. Yet when investigated, the stories turn out to be completely false and often serve to point out the good side of the ACA while at the same time demonstrating the lack of any scruples in the right-wing groups that are pushing the lies to further their own ideology.

But when the news is so blatant, we all should stop to make sure we understand the source and more often than not, it is a satirical source, like The Onion. Recently Snopes was asked about the veracity of a piece of news traveling around the social media; here is their report:

On 1 July 2014, the Daily Currant published an article positing that the manager of one of the Hobby Lobby chain’s retail craft stores had executed a gay employee by stoning:

Managers at a Hobby Lobby store in Arkansas stoned to death an employee today for being gay.

According to a report in the Ozark Post-Gazette, the store’s management decided to execute Jeremy Gleason, 43, in an alley behind the store in accordance with the Biblical verse Leviticus 20:13, which commands believers to kill homosexual men.

The assailants reportedly tied Gleason to a pole and threw large chunks of granite and whole bricks at his body. An autopsy later revealed the adoptive father of 2 young children died of blunt force trauma to the head.

By the end of the day links and excerpts referencing this article were being circulated via social media, with many of those who encountered it mistaking it for a genuine news item. However, the article was just a bit of political humor from the Daily Currant which spoofed the Supreme Court ruling supporting Hobby Lobby’s challenge to the federal mandate requiring them to provide health insurance with contraceptive coverage female employees, on the grounds that doing so violated the company’s closely held Christian beliefs. …

And Snopes went on to highlight other humorous stories, stories which were increasingly ridiculous but still may have warmed the cockles of many a right-wing heart (where present):

The Moonmont Chronicle published a story about clothing retailer JCPenney sacrificing employees to a Lovecraftian deity:

Citing the newly-established precedent of corporate-religious exemption, the U.S. Supreme Court ruled Tuesday in favor of JCPenney, upholding the company’s right to sacrifice pure-hearted employees in order to assuage the Dread Lord Cthulhu, Bringer of Madness.

And The Atlanta Banana published a item about pizza chain Little Caesar’s:

The Supreme Court ruled on Monday that Roman-owned pizza chain Little Caesar’s was within its rights to place Christian employees in an arena and then unleash starved, vicious lions and lionesses upon them. The court cited religious freedom as its guiding principle. The 5-to-4 ruling opened the door to potentially thousands of Christian Little Caesar employees nationwide being immediately fed to the top predators of the African savannah.

Little Caesar’s argued that the persecution of Christians and the feeding of them to ravenous big cats was a “deeply held” religious belief, that the continued survival of the roughly 6,000 Christian employees, as well as the fact that they remained on company payroll, imposed a “substantial financial burden” on their religious liberty.

Read this posting and other related postings at snopes.com, a good site to have at the ready whenever you hear a rumor or read a story that just might not be true.