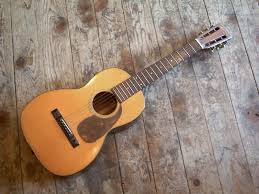 When I was short of money the ’80s I took my guitars into a shop in New Jersey and discovered the little 5-18 was worth three-times the value of the D-28. My daughter now has the D-28 and I still have the 5-18 (now at least in a gig-bag). Due to arthritis and other old age complaints, I really cannot play the guitar any more but I discovered the ukulele recently and with only four soft strings, I’m having fun.

The value of the 5-18 keeps climbing so I’m holding on to it. I never have really investigated the instrument but this morning I was hopping around YouTube and found a video of someone playing a 1944 Martin 5-18: the playing is great, the guitar looks almost new, and I had to share …