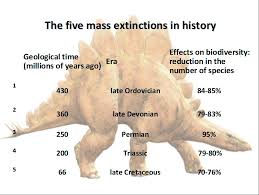 There is irrefutable scientific evidence of five global mass extinctions in the history of this planet independent of a flood, loose morals, or a mythical, Puck like god flitting through the bushes playing tricks on the gullible humans to make it seem like the earth has been around  long enough to be overdue at the cosmic library. Elizabeth Kolbert has written a very readable account of these extinctions and represented contemporary evidence that suggests a sixth extinction is in progress and may well be inevitable no matter how much profit Exxon or BP made last year.

Kolbert makes it clear that what causes an extinction can be catastrophic or gradual but the bottom line is that the existing species on the planet are in trouble when something alters the environment, even a little bit. So when you hear that Global Warming is nothing to worry about—it has happened throughout the life of the planet—it’s good to remember that compared to the dominance of most animals on this Earth, humans are little more than a speck  on the timeline. And those other dominate species are all extinct now, their deaths greatly the result of environmental changes much like Global Warming.

But it isn’t the disappearance of the dinosaurs that is most frightening about extinctions: it is the small, incremental changes that go into the march towards catastrophe. And what Kolbert’s book is about is all the small extinctions that are adding up rapidly in a world that argues about a pipeline which will nudge us towards our own death as a species.

Everyone should read this book. It’s clearly written by a journalist and not a scientist but there is a good blend of science and reporting which makes it both interesting and readable. Several times in the narrative I stopped to think of the thousands of hours a biologist spends inventorying trees in South America year after year in contrast to some fat idiot who takes time off from his sipping whiskey to pontificate about how he doesn’t believe in Global Warming: how it’s all a hoax.

There are many options for the future—bare, dying trees without honey bees; no more fish to eat; no more oxygen to breathe—but I’ll leave it to the author for some final words:

In an extinction event of our own making, what happens to us? One possibility … is that we, too, will eventually be undone by our “transformation of the ecological landscape.” The logic behind this way of thinking runs as follows having freed ourselves from the constraints of evolution, humans nevertheless remain dependent on the earth’s biological and geochemical systems. By disrupting these systems—cutting down tropical rainforest, altering the composition of the atmosphere, acidifying the oceans—we’re putting our own survival in danger. Among the many lessons that emerge from the geologic record, perhaps the most sobering is that in life, as in mutual funds, past performance is no guarantee of future results. When a mass extinction occurs, it takes out the weak and also lays low the strong … The anthropologist Richard Leakey has warned that “Homo sapiens might not only be the agent of the sixth extinction, but also lists being one of its victims.” A sign in the Hall of Biodiversity offers a quote from the Stanford ecologist Paul Ehrlich: IN PUSHING OTHER SPECIES TO EXTINCTION, HUMANITY IS BUSY SAWING OFF THE LIMB ON WHICH IT PERCHES.

Of course there’s always the option where we abandon this dump and fly away to a new planet. After all, it’s not like we live by the myth that this world was given to us by an all-powerful and all-seeing deity to nurture and care for, right? 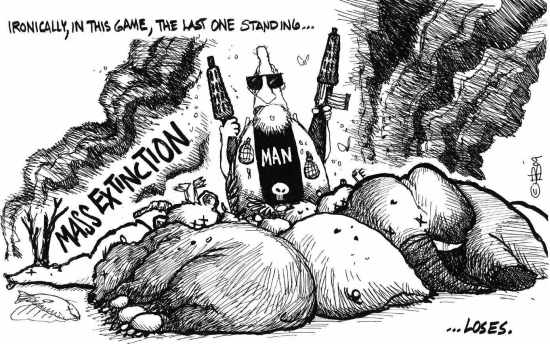