It was fine too in Northern France and Flanders. But those who lay on their backs, dying or wounded, did not stare up at the blue sky with a sense of lucid affirmation as Tolstoy describes Prince Andrey doing on the battlefield of Austerlitz. The finer the day, the greater the confusion death caused on the Western front. Death had been robbed of all significance there; consequently it was easier to accept it as one more condition, like the mud or the cold, in a world fundamentally inhospitable to man, than in a climate and season so full of promise. It’s a fucking fine day to croak. 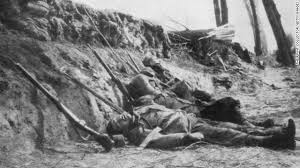 Quotations from G. by John Berger.