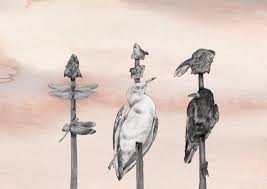 Okay. Someone told me this was a novel I had to read .. and without delay. I read it. At first I didn’t consider it worth the effort to comment on but then I decided it needed a quick opinionated slam and a whack or two from the critical wasp-swatter that is my somewhat squirrelly mind.

First, a plus: Iain Banks was quite effective in creating a sort of timeless, unspecified location with small group of characters who are not clearly developed. As you read more of the novel, certain unexplainable things eventually do get explained, but not necessarily in an integral relationship with the narrative. Too often the revelations appeared to be for shock value rather than to explain the quirks in the narrative. In other quieter revelations, the reader can gather evidence for the time period, the location, and some of the relevant facts and issues surrounding life on a small off-shore island.

Structurally, The Wasp Factory starts out as something like a dystopian novel, resolves itself into a contemporary dysfunctional family story, and throws in a shocker (yawn) at the end just to see if you’ve been paying attention.

But now the negative: All the interesting weirdness in the novel seems to be appliquéd onto a strong plot point that becomes the big twist—the shocker at the end of the novel. I found that by going back over the novel, there was a paucity of relevance to the conclusion. Not good. This is the type of novel that I refer to as “lunch money”: bend over, write it fast, collect your lunch money, and go to Disney World.

The one image in the novel that is good is the habitat-of-death in the actual wasp factory. Place a live wasp in a hub-habitat with paths leading out in all directions (like a wagon wheel) and a particularly sadistic means to kill the wasp at the end of each spoke … will the wasp drown, burn, or die trapped in petroleum jelly? Two problems, though, even with this image: first, Banks insists on explaining the relevance of the image (I hate that) and second, I was confused while reading: is the wasp factory in the loft or in the bunker (Banks may have editing problems in the early editions). There is a third problem that I have mentioned earlier: what does a wasp trapped and killed in a fanciful secret laboratory have anything to do with the ultimate reveal in the novel?

One comment I received was from a reader who can’t get enough Banks but considered The Wasp Factory as being one of the author’s lesser works. I had thought it was one of the author’s more important works. As I am won’t too, I looked up Iain Banks on the internet and discovered he writes fiction under the name Iain Banks and also under the disguised name of Iain M. Banks when he stoops to science fiction. I wonder where the author’s ultimate appeal actually lies: general fiction (even if creepy) or science fiction? I will try one of his scifi novels to tweak my scientific curiosity.

For those readers who enjoy transgressive fiction, The Wasp Factory has some value, but don’t expect too much.