The world runs out of fossil fuels, climate change is wreaking havoc, new diseases are exploding, businesses are closing, basic human needs (like cell phones and lip gloss) are no longer available, marauding gangs rule the streets, reservoirs are emptied since water is scarce, roads are falling into ruin, commerce has broken down, and life is cheap.

What do you expect the millionaires and billionaires do to save life as we know it on this planet? Correct! They all pack-up and move to elite enclaves to escape the misery of the hoi poloi, the great unwashed, the mob, the other 99%. But California, by Edan Lepucki, is not a novel investigating the issues of our day, nor is it a story extrapolating the future of Republican greed versus hippy altruism: it’s the story of a reasonable development in our future civilization.

You might consider California a dystopian fiction but I hesitate to use that term. If I were to write a novel about how a Republican became the President of the United States in 2016, would you call it a horror story? Okay, bad example (I would too).

I am friendly with a vigorous reader who insists that things cannot be called “Historical” until they are at least fifty years old (oh goody, I qualify!). Since today is the 50th anniversary of the March on Selma, I guess I finally will be allowed to refer to the struggle for civil rights in America as historic, rather than just a significant event I remember from my salad days. But I wonder if the same idea doesn’t also pertain to writing or referring to the future. If so, then California cannot be call dystopian fiction for another 49 years. Until 2065 it must be considered just a friendly warning you might find in a fortune cookie.

And now a quick (and not too revealing) synopsis: a rube from Cleveland goes to a college in California which teaches the students to milk goats and cross-pollinate rhubarb in between deep philosophical discussions on the eschatological significance of lichens, the ramifications of going to war against an army of newts, and whether a thong effects brain functions. The rube’s roommate has a sister, love finds rube and sister escaping from their one-room honeymoon apartment in Los Angeles to hide out in the wilds of the Sierra foothills … all alone, no electricity, gathering nuts and berries or chowing down on the occasional ground squirrel with liverwort dressing, with nothing to do when the sun is eaten by the dragon except screw and keep secrets.

Then they stumble upon an enclave of organized survivors calling themselves Pretentious (or something like that) and the rube and his pregnant short (I told you they screwed) notice there are no kids in the enclave.

Then it gets evermore complicated, but I leave it for an exercise. Notice that several characters freak-out when they see something colored “red”: why? 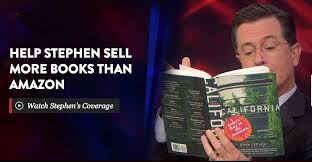 California is easy reading, makes a few salient observations, but also reminded me of several other books and at least one TV show. Lepucki, who was born in Poland and raised in Los Angeles, is a product of the Iowa writers program . She loses a few points for Iowa but gains them back since she teaches writing at the UCLA Extension. You may recall the bru-ha-ha over Amazon putting the screws to Hachette and Stephen Colbert stepping up to the fight (Hachette is also Colbert’s publisher): well, this is the book that started the war. You should read it if anything for its entertainment value. If you’re like me and a California expat, there’s just enough i the book to remind you of Los Angeles as you remember it.

One major problem with California: the boys all go to Plank College in California to learn philosophy and animal husbandry with a minor in beets. Of course Plank College is fictional but the author didn’t have to make it absurd by suggesting that a college would offer a four year degree at no charge … free, gratis, un-American.

History of the Kings of Britain — Geoffrey of Monmouth