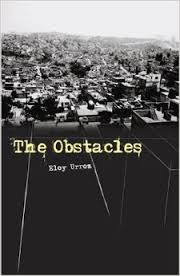 The Obstacles by Eloy Urroz is a wild ride in an old Ford up the coast of Baja California. It’s all fiction and it’s all about fiction. And if you don’t pay careful attention, it’s easy to take a wrong turn and end up in the land of confusion. But it’s also a good book and I recommend everyone read it (in Spanish, if possible). One hint as to the author: Urroz was a part of the Mexican literary movement which sought to kill the prevailing school of Magical Realism. I know many readers that will be jumping up and down after hearing this. I suppose just about any literary style is enjoying shorter and shorter periods of popularity. Maybe this Magical Realism stayed around too long?

The Obstacles, as I said, is a good book, but not a great book.The review at The Quarterly Conversion provides an excellent overview of the text pointing out its strengths and weaknesses, but it also is packed with spoilers (so beware).

The Obstacles is the story of two writers, Elias and Ricardo, who live in different towns and are writing novels about each other (and each other’s city). Both writers are also searching for love, whether it be through violence, religion, abstinence, or more traditional venues.

The novel’s structure is complex but not confusing: four or five narrators alternate, there are a few typographical experiments, and much of the story is told through poems, short stories, and a novella, all of which are woven into the narrative (some more seamlessly than others). The Obstacles (Urroz’s novel) is also Las Rémoras (Ricardo’s novel), and as characters sometimes seem to step right out of the writers’ novels, Urroz has set out to make fiction and reality interchangeable, or at least to make the reader consider the possibility that they are.

Although there’s a lot to find fault with, Urroz’s novel is stimulating and bound to keep you reading and thinking. My biggest problem, however, is with the ending. For whatever reason, Urroz feels the need to tie everything up neatly and to make sure the reader is aware of the variations and overlaps in the novel. I hate that! It always seems to me that the author is suggesting I am too dumb to understand the complexities and tropes in his (or her) novel. As the review points out:

Initially, the subjects of love, relationships, and sex loom large. They are subjects that are endlessly fascinating, items that all artists will consider in their careers, and one gets the idea that Urroz has a lot to say on this topic. But instead of becoming more metaphysical and ponderous and exploring his trains of thought wherever they might lead, he gets hung up on revealing unknown fathers and the truth about a murder and having everyone explain everything. It’s as if he didn’t trust his readers to keep reading if he got away from the plot and story for very long. Perhaps in its original language there’s something going on in this novel which is lost in its translation, but in English The Obstacles is just an average story that lacks the insight or philosophical intrigue to sustain it. A little magical realism maybe could have livened things up a bit.

I guess Urroz was lucky I didn’t make a new dent in the wall with his novel.