Book lists perform many functions. Primarily they provide a shortcut to reading some very good books. But if you are thinking critically about the list and have some experience in reading and literature, you know that any list is just an opinion (and in some cases has a hidden agenda favoring a certain publisher). But lists can be fun too. I find that I can take any list and mentally reorder it, removing some titles and adding others and then, what is endlessly fascinating, I can take the same list I created last year and rethink it, making an entirely new list.

Yes, our opinions change, our literary tastes vary, even the books we once considered great have faded from memory only to be replaced by new novels we’ve read recently. I think this is the most telling thing about lists: they represent our opinions for only a relatively short time. How many times have you been told the best book is some popular story that still sits on the front-rounder at Barnes and Noble? Look at most of the lists and you’ll see a definite bias towards newer works. Take the venerable 1001 Books You Must Read Before You Die: You would think that the predominance of great literature was published in the last half of the Twentieth Century.

I also find individual book lists an informative insight into the reader who made the list. But perhaps we shouldn’t read too much into the lists. Still, if any book over 300 pages is hated and only books filled with action and sex are highly rated, it might reflect on the reader’s literary acumen. But what can be said of a reader who exhibits the preference for literature that tracks well with time-honored lists? If you have read Tolstoy and consider his works great, should you not place them high on your list just because everyone else does?

Salon has published a strong opinion of these list in the article, Literary pissing match, bloggers vs. distinguished critic edition: The absurdity of these dumb “my ‘great books’ list is better than yours” debates. Here is just a few excerpts to whet your appetite:

The book list, and most particularly any list of the “greatest” books, is an exercise that always seems to leave us dumber. Such lists take everything that is exhilarating about a literary experience, everything idiosyncratic and transformative about each reader’s unrepeatable encounter with an author, and turn it into a contest, a checked-off task, a quarrel.

But we do love those lists. I’ll venture to say that Americans crave them more than most, perhaps because a greatest-books list summons our competitive instincts and meritocratic fantasies. We want our favorites to rank high in the eyes of the world, which in turn confirms that we’re better-read and have better taste than a host of imaginary rivals. Hand us a list that denies both of those desires and you’re still giving us something we prize: a grievance, and the acrid joy of shaking our fists at the sky, prophets without honor in our own country. …

For all the evident sincerity of these lists, this has also, in one form or another, been done and done and done. It’s not engaging unless you are the sort of person who likes to argue unceasingly about which books belong on great-books lists, and if you are such a person, I’m very sorry to have to tell you that you are boring. …

No list is, whatever its constituents. And if any species of literary conversation is guaranteed to bulldoze the infinite variety of readerly delight, it’s the making of great-books lists and the stupid and pointlessly contentious arguments that proceed from them. Without all that, both parties might sooner recognize that they are not really so different. Bloom and Book Riot share something bigger than any of their disagreements: a propensity to geek out on books, and embarrassingly so.

Read the specifics of the Harold Bloom and Book Riot controversy in the original article at Salon by Laura Miller. 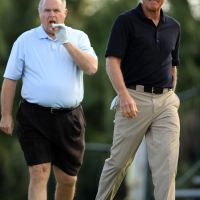