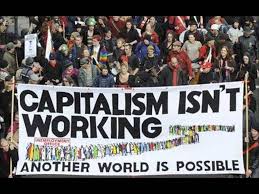 Everyone should read Paul Mason’s article in The Guardian titled, The End of Capitalism Has begun. It’s full of ideas and observations, many of which are intuitive but others came as a complete surprise. It’s long but well worth reading to the end.

The premise is, of course, that Capitalism is unsustainable and is in fact already being taken over by a new and more logical model which the author calls Post-Capitalism. The key element of Post-Capitalism is the explosion in the accessibility of information in the age of computers and the internet. One observation Mason makes is that information does not fit into the tradition business model of Capitalism. To put it succinctly: What do you charge for information? The traditional model would charge based on the scarcity of the product—the more rare it is, the more it costs—but information is everywhere and can easily be accessed. As the information grows, if you follow the traditional pricing method, the product will get cheaper and cheaper until the business can no longer support itself and goes under. Capitalism is eating it’s young.

Postcapitalism is possible because of three major changes information technology has brought about in the past 25 years. First, it has reduced the need for work, blurred the edges between work and free time and loosened the relationship between work and wages. The coming wave of automation, currently stalled because our social infrastructure cannot bear the consequences, will hugely diminish the amount of work needed – not just to subsist but to provide a decent life for all.

Second, information is corroding the market’s ability to form prices correctly. That is because markets are based on scarcity while information is abundant. The system’s defence mechanism is to form monopolies – the giant tech companies – on a scale not seen in the past 200 years, yet they cannot last. By building business models and share valuations based on the capture and privatisation of all socially produced information, such firms are constructing a fragile corporate edifice at odds with the most basic need of humanity, which is to use ideas freely.

Third, we’re seeing the spontaneous rise of collaborative production: goods, services and organisations are appearing that no longer respond to the dictates of the market and the managerial hierarchy. The biggest information product in the world – Wikipedia – is made by volunteers for free, abolishing the encyclopedia business and depriving the advertising industry of an estimated $3bn a year in revenue.

Almost unnoticed, in the niches and hollows of the market system, whole swaths of economic life are beginning to move to a different rhythm. Parallel currencies, time banks, cooperatives and self-managed spaces have proliferated, barely noticed by the economics profession, and often as a direct result of the shattering of the old structures in the post-2008 crisis. … 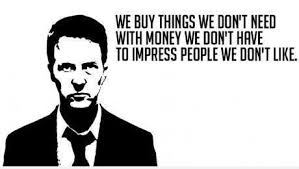 Neoliberalism, then, has morphed into a system programmed to inflict recurrent catastrophic failures. Worse than that, it has broken the 200-year pattern of industrial capitalism wherein an economic crisis spurs new forms of technological innovation that benefit everybody.

That is because neoliberalism was the first economic model in 200 years the upswing of which was premised on the suppression of wages and smashing the social power and resilience of the working class. If we review the take-off periods studied by long-cycle theorists – the 1850s in Europe, the 1900s and 1950s across the globe – it was the strength of organised labour that forced entrepreneurs and corporations to stop trying to revive outdated business models through wage cuts, and to innovate their way to a new form of capitalism.

The result is that, in each upswing, we find a synthesis of automation, higher wages and higher-value consumption. Today there is no pressure from the workforce, and the technology at the centre of this innovation wave does not demand the creation of higher-consumer spending, or the re‑employment of the old workforce in new jobs. Information is a machine for grinding the price of things lower and slashing the work time needed to support life on the planet.

As a result, large parts of the business class have become neo-luddites. Faced with the possibility of creating gene-sequencing labs, they instead start coffee shops, nail bars and contract cleaning firms: the banking system, the planning system and late neoliberal culture reward above all the creator of low-value, long-hours jobs.

Innovation is happening but it has not, so far, triggered the fifth long upswing for capitalism that long-cycle theory would expect.

The idea of increasing leisure time for workers has been a part of the promise of the future since I was a wee bairn. But it has not only not come true, but most people and families are working more and more just to survive. It seems clear to me that this current form of wage-slavery is a result of shortsighted people in a place of economic and political power that are insisting on maintaining the old ideas, such as Capitalism, when the world is changing dramatically. Conservatives and especially Neo-Cons are blind to reality and will destroy the world’s economy (possibly even the planet itself) in an effort to assure that they have the most toys.

For the past 25 years economics has been wrestling with this problem: all mainstream economics proceeds from a condition of scarcity, yet the most dynamic force in our modern world is abundant and, as hippy genius Stewart Brand once put it, “wants to be free”.

There is, alongside the world of monopolised information and surveillance created by corporations and governments, a different dynamic growing up around information: information as a social good, free at the point of use, incapable of being owned or exploited or priced. I’ve surveyed the attempts by economists and business gurus to build a framework to understand the dynamics of an economy based on abundant, socially-held information. But it was actually imagined by one 19th-century economist in the era of the telegraph and the steam engine. His name? Karl Marx. 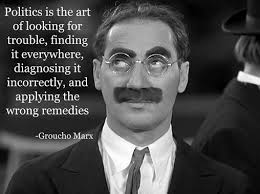 Marx is a very interesting thinker. All too often in this country we equate the observations and theories of Marx with the totalitarian governments of the world which adopted Communism, partially based on Marxism. The decades of anti-communist propaganda, unfortunately, has kept too many people from sampling the ideas Marx expressed in his writings: there’s a lot of good stuff in there. One item that Mason’s article points out is Marx’s thoughts on the increased availability of machines to do the work once requiring strong arms and heavy concentration.

In an economy where machines do most of the work, the nature of the knowledge locked inside the machines must, he writes, be “social”. In a final late-night thought experiment Marx imagined the end point of this trajectory: the creation of an “ideal machine”, which lasts forever and costs nothing. A machine that could be built for nothing would, he said, add no value at all to the production process and rapidly, over several accounting periods, reduce the price, profit and labour costs of everything else it touched.

Once you understand that information is physical, and that software is a machine, and that storage, bandwidth and processing power are collapsing in price at exponential rates, the value of Marx’s thinking becomes clear. We are surrounded by machines that cost nothing and could, if we wanted them to, last forever.

In these musings, not published until the mid-20th century, Marx imagined information coming to be stored and shared in something called a “general intellect” – which was the mind of everybody on Earth connected by social knowledge, in which every upgrade benefits everybody. In short, he had imagined something close to the information economy in which we live. And, he wrote, its existence would “blow capitalism sky high”.

The main contradiction today is between the possibility of free, abundant goods and information; and a system of monopolies, banks and governments trying to keep things private, scarce and commercial. Everything comes down to the struggle between the network and the hierarchy: between old forms of society moulded around capitalism and new forms of society that prefigure what comes next. … Is it utopian to believe we’re on the verge of an evolution beyond capitalism?

It is the elites – cut off in their dark-limo world – whose project looks as forlorn as that of the millennial sects of the 19th century. The democracy of riot squads, corrupt politicians, magnate-controlled newspapers and the surveillance state looks as phoney and fragile as East Germany did 30 years ago.

All readings of human history have to allow for the possibility of a negative outcome. It haunts us in the zombie movie, the disaster movie, in the post-apocalytic wasteland of films such as The Road or Elysium. But why should we not form a picture of the ideal life, built out of abundant information, non-hierarchical work and the dissociation of work from wages?

Millions of people are beginning to realise they have been sold a dream at odds with what reality can deliver. Their response is anger – and retreat towards national forms of capitalism that can only tear the world apart. Watching these emerge, from the pro-Grexit left factions in Syriza to the Front National and the isolationism of the American right has been like watching the nightmares we had during the Lehman Brothers crisis come true.

We need more than just a bunch of utopian dreams and small-scale horizontal projects. We need a project based on reason, evidence and testable designs, that cuts with the grain of history and is sustainable by the planet. And we need to get on with it.