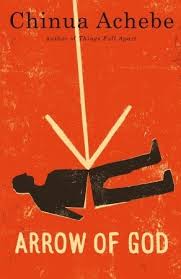 Reading literature from around the world is both entertaining and educational, even if it is fiction. We are seeing more and more writing coming out of Africa and I find that, despite the grass houses and curious religious activities, the life in Africa is often very similar to the life in the United States. No, few of us have a sacred python living in the rafters of our living room, but what about that Virgin Mary statue on the bureau or that USC pennant on the wall? We may not equate such fetishisms with religion, but maybe we should. Stop and think about it.

Chinua Achebe is definitely one of the most recognized contemporary Africa authors. His first novel, Things Fall Apart, is often the only book people read by an Africa author. I notice that Achebe is becoming common on college reading lists so I expect we will be seeing far more literature from Africa. But I invite anyone to make a simple search through African literature and gather up many newer authors to give variety and enlightenment to your reading list.

A titled Igbo chieftain himself, Achebe’s novels focus on the traditions of Igbo society, the effect of Christian influences, and the clash of Western and traditional African values during and after the colonial era. His style relies heavily on the Igbo oral tradition, and combines straightforward narration with representations of folk stories, proverbs, and oratory.

Arrow of God is the third novel I have read that was written by Achebe. I can vouch for its interesting narrative but the action is somewhat tedious. In another post I gave it my Two Years Before the Mast award: great book, educational, but don’t fall asleep reading it.

The one thing I notice is that the story told by a native never gives the impression that the people of Africa are any less intelligent or complex that the colonialists who are brutishly trying to replace the local culture with their imported culture. If you read books about Africa told by outsiders, especially European colonialists, you get a different impression and it is unfortunate. I read a little blurb about Achebe’s opinion of Joseph Conrad that you might look up to get a better insight into the issue.

Achebe served as a Professor of Africana Studies at Brown University until his death. His bibliography is below.

Beware, Soul-Brother, and Other Poems (1971) (published in the US as Christmas at Biafra, and Other Poems, 1973)
Don’t Let Him Die: An Anthology of Memorial Poems for Christopher Okigbo (editor, with Dubem Okafor) (1978)
Another Africa (1998)
Collected Poems Carcanet Press (2005)
Refugee Mother And Child
Vultures

I found this passage from Arrow of God interesting, especially if you apply it to the current election process in the United States.

Long, long ago there had been a fifth title in Umuaro—the title of king. But the conditions for its attainment had been so severe that no man had ever taken it, one of the conditions being that the man aspiring to be king must first pay the debts of every man and every woman in Umuaro.

I suspect such a condition in the United States would tend to empty out the clown car.