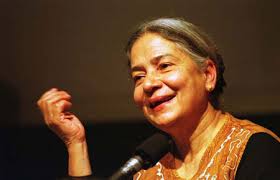 The Museum of Final Days, on my reading list for a long time so I was quite pleased to find it in Desai’s collection of three novellas titled, The Artist of Disappearance.

Knowing the history of the Empire and it’s subjugation of India, the themes of decay and regret are not so subtly used as the focus of this book.

The Museum of Final Journeys presents a lush, green world of abandoned plantations. A minor government officer, the unnamed narrator, unhappily is responsible for administering a unfamiliar rural district. When asked to assist in the continuance of an old, decaying estate made up of the accumulated trinkets and oddities of a long forgotten age, the young officer recognizes the dissolution and melancholy of an old, forgotten past.

The second novella is titled, Translator Translated. Here the theme is literary and academic politics—the hierarchy between writer and translator—and a satirical stab at the idea that local writing need be translated into the language of the colonial oppressors.

The title novella exposes the character of Ravi: uncomfortable around other people and only content in nature. Ravi lives in its ruins of the family’s hill house which had burned. Then a group from Delhi arrives to film a documentary about the environmental degradation resulting from an industrializing India and disrupts the life of The Artist of Disappearance (oh, he does disappear .. or at least he hides out until the film crew leaves).

The epigraph to “The Artist of Disappearance” quotes from “Everness” by Jorge Luis Borges: “One thing alone does not exist — oblivion.” After I read the three novellas, I spent some time contemplating how this quotation is reflected in each story. You should do the same.

I have only read a couple of books by Anita Desai (and one by her daughter, Kiran), but I have several on the book shelves demanding to be read. I also need to read more of Amitav Ghosh.

Here is the selected bibliography for Anita Desai taken from Wikipedia: