03/09/2016 By Mike in Human Nature, Reading, Something To Think About Tags: compulsive, George Lakoff, Metaphors We Live By, sidewalks, Where's Waldo? Leave a comment 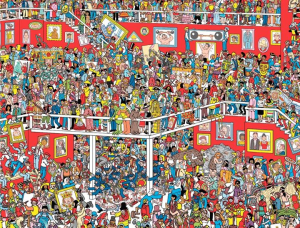 When I was much younger I sometimes passed the time playing mind games on myself. One highly sexist and totally shameful game was to mentally set a time limit and then, scanning the crowd at the farmer’s market or enjoying a picnic at the park or rushing to the subway, pick out the one woman I would most want to have casual relations with. Then I would reset the mental stopwatch, turn to the left, and callously cast my lusty ennui in a new direction. Obviously this was entirely mental and I never once even spoke to a woman who caught my attention.

As I think back on these episodes, they did allow me to both notice and appreciate all types of women and at the same time expose my personal ideas of surface beauty.

If you’re interested, I at one time mentioned to a friend that I was attracted to women who might be described as “frumpy.” By that I meant women who did not rely on a vast amount of artificial coating to make themselves attractive: women who were soft and comfortable, intelligent and well-spoken, dressed for comfort and not to advertise. Quite the opposite of what is referred to as a”show-wife” or “eye-candy.”

Like most of us, I also played the game where, usually through repetition, even common words would begin to sound silly or stupid or inherently wrong. I suspect this phenomenon (game) might lead to a lifetime of esoteric study of language and meaning. It might even be the kind of stuff that gave us Jacques Derrida. Games can have unexpected consequences.

But the one mind-game that began to mess with my little gray cells was involved with the connectedness of all things around me. I would look at a sidewalk and break it down into concrete and then break concrete down into sand and cement and toss in the delivery truck that brought the stuff to the street where the sidewalk was being constructed by three guys in dirty jeans with red bandanas that had pirates in the design which once flew over the fo’c’sle of a ship of the line manned by scurvy privateers wearing stripped pants made out of cotton picked in the plantations in America where sweet tea and hominy grits are served to … and on and on.

It could drive you crazy.

You’ve heard of the obsessives who won’t step on a crack in the sidewalk or who are compelled to open and shut doors ten times before they accept them as closed or who wash their hands compulsively and constantly. Well, my compulsion is a bit like Sesame Street in that I often count compulsively. I think this was an outcome of knitting where I regularly counted out each stitch as I worked, even though it was unnecessary, but it might have gone back to the counting games we played to amuse ourselves on long road-trips in order to avoid becoming the target of Father’s anger too often (and no, we never wanted him to climb into the backseat to set us straight). We used to count cows, telephone poles, Burma Shave signs, saguaro cactus, yellow cars, Volkswagen Beetles (Made in der Black Forest), road runners, root beer stands, out-of-state license plates, motels with vacancies and heated pools, and even heads of cabbage on the side of the road (traveling through the Salinas Valley, of course). 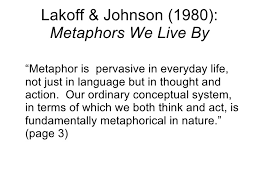 Apropos to a recent discussion, after reading Metaphors We Live By by George Lakoff and Mark Johnson, it was easy to get into a mind-game that chained all of life and all of knowledge into cascading metaphors. At one time I even posited that “Everything Is Metaphor” but immediately realized that you can’t have metaphor if you don’t have things that are not metaphor. It’s like the chicken or the egg conundrum. But even if I accepted some sort of “real world,” perhaps akin to Plato’s cave, I can still get myself trapped in the metaphor spiral.