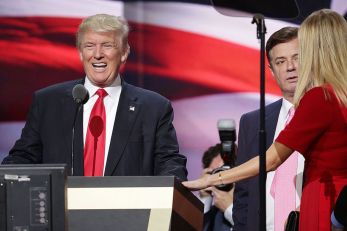 There is a very convincing conspiracy theory being touted over at the Daily Kos in a post by Mark Sumner. Simply put, it demonstrates possible evidence that Donald Trump is a paid operative of Vladimir Putin in an attempt to foment chaos in the United States electoral process. The post is titled

Donald Trump may be acting crazy, but it’s keeping the news away from the one story he wants to bury

Do you think Trump doesn’t dare to release his income tax forms because they would reveal a dangerously high level of monetary remunerations coming from Russia?

None of that is speculation. Not one word of it is theory.
Right now, there’s no proof that Trump and Manafort have been involved in a quid-pro-quo arrangement with Vladimir Putin. However, this whole thing stinks to high heaven. This isn’t just a hint of smoke on the horizon, this is a raging forest fire of connections between a United States presidential candidate and a foreign power.

Interesting to speculate. Even more interesting is the effect of this speculation on the Trump supporters. The Trump detractors really need no further evidence that Donald Trump is a mentally challenged huckster who scores 100 percent on the sociopath scale, but is it conceivable that red-blooded gun carrying Right-Wing patriots would overlook even a hint of a suggestion that Trump is in bed with the Russkies.

Then again, it might not be a evil plot, just Donald Trump lining up a sexy Chaturbate model from Moscow to be his fourth wife.