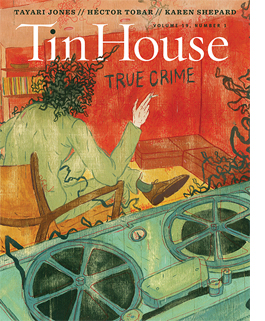 The town claimed to be shocked by the arrests, but most confided that they’d always known Penny Misko would end up doing something like this. She’d always been a liar and a drunk; it was not hard to imagine that she could leave a neighbor in the road not twenty feet from her front door . . . The more compassionate suggested that maybe she hadn’t known she’d hit someone, but they’d been dismissed. The car’s windshield had been replaced! The police who’d retrieved it from the body shop said the damage was “consistent with something large striking it.” Something like Brenda Leroy’s head. The Miskos had left her in the street, and they’d sat there at their kitchen table listening to the ambulance come and go, and they’d lied, lied, and lied again. And Brenda was their neighbor. She’d known them her whole life. Penny had worked with Brenda’s mother at the sleeping bag factory. Penny Misko was a terrible person. Not guilty? they said. Please.

So writes Karen Shepard, describing the impact of a hit-and-run on a close-knit community. This fall, Tin House explores the gamut of true crime, from In Cold Blood and Charles Starkweather to the subprime mortgage crisis and police brutality. We’ve got poetry and prose that address our impulses surrounding crime and injustice—the voyeuristic fascination with it and the urge to indict, among others—and the difficult work of survival and healing.

We envisioned the theme of True Crime as a way to engage with our country’s voyeuristic obsession with rogues and outlaws, the Starkweathers marauding our badlands. Justin St. Germain, in his essay “Murder Tourism in Middle America,” returns to Truman Capote’s In Cold Blood and visits the Kansas village of Holcomb as a way to confront his own mother’s murder. The fiction writers take us into the gray, Tayari Jones exploring a night in question in an excerpt from her new novel, An American Marriage, and in her short story “Rescue,” Karen Shepard unravels a tight-knit community’s reluctance to face the truth about a deadly hit-and- run. Hafizah Geter’s searing “Testimony” series of four poems—for Eric Garner, for Michael Brown, for Sandra Bland, for Tamir Rice—gives voices to those silenced by police brutality. Claire McQuerry’s poems view the American dream through the jaundiced lens of the subprime mortgage scandal. And Matthew Zapruder’s “Paul Ryan” is a grand indictment that offers the rarest gifts—grace and transcendence from our current criminal state. Where there is friction, there is fire. We hope that this incendiary issue burns clear and bright.

Roger Reeves
PAST BARABBAS
PRAYER OF THE JAGUAR

And a Readable Feast