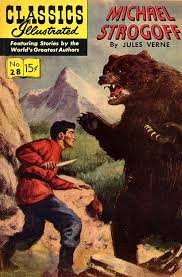 This is the only Classics Illustrated title that I remember owning. I’m sure there were others but even comic books often dissolve in the mist of time. The funny thing is I vividly remember the scene where Michael Strogoff is blinded by the super-heated Tartar knife passed before his eyes. I didn’t know you could do that. I also didn’t know what a Tartar was and even today I’m not totally sure.

I also remember thinking “Strogoff” was a weird name, especially when linked with a great name like “Michael.”

So, sixty years pass and I finally read the Jules Verne book, Michael Strogoff; or The Courier of the Csar. It’s interesting to consider that a book about a Csar and Tartars and Siberia back then was as much a fantasy as the giant chickens on the Mysterious Island, Now I know about all that: I’ve read Solzhenitsyn and seen Star Wars. But the wonder and excitement that Jules Verne instilled in my wide-eyed youth immediately had me hooked on this story. Even if it wasn’t the best Jules Verne, it was darn exciting.

One thing that struck me about Michael Strogoff is thinking about the lives of Siberian peasants compared to today’s less privileged people. When the Tartars rolled into town they killed everyone, stole everything, and burned the village to the ground. Despite some parallels to the current administration in Washington, I can’t think of any towns in America which are targets for complete annihilation. It might be more difficult to get a manicure or eat at Fuddrucker’s, but even with the scourge of Covid-19, most people will survive. 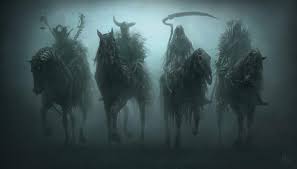 Recall the Four Horsemen of the Humanist Apocalypse. It’s not just Pestilence; it’s also War and Famine and Dangerous Beasts.

Are the forces of Good and Evil massing on the Plains of Georgia as we speak?

What's It All About