When I was in High School I bought an old Pontiac from friends of my Dad; I was going to fix it up but it never ran and not having proper tools, I probably did more damage than fixing on it. Later on the school’s carnival committee was looking for an old car to beat on with a sledge hammer and I gladly donated my old Pontiac (they even took it away). I was only out the $25 I paid for it and the carnival raised a lot of money what with all the macho guys who insisted on striking the blow that completely knocked the hood off its hinges.

I stood there with my girlfriend and watched. It was fun.

But that’s not why I bring up the old Pontiac: the people I bought it from were very active in Democratic projects in the eastern county. For a while there they we trying to get my Dad to run for mayor. If truth be told, it was probably a good idea: my Dad was well known, civic minded, and damn smart. So while I was buying the old Pontiac for $25, it was suggested that maybe I should get involved in local politics, especially since there was a local election coming up.

END_OF_DOCUMENT_TOKEN_TO_BE_REPLACED

I have just spent a few delightful and amusing minutes following a history of the human penchant for applying colorful expressions when referring to the genitals, male and female. It starts with an article on Slate titled,  Furburger, the Irish Inch, and Other Names for Genitalia Through the Ages, by Katy Waldman

You and me [sic] may be nothing but mammals, but we are mammals that talk about sex a lot more than our cousins on the Discovery Channel. Now lexicographer Jonathan Green has created two interactive timelines tracing slang words for male and female genitalia through history. He’s compiled words for the penis and its satellite parts, going back to 1360, and also words for the mons pubis, going back to 1230.

Some fun facts: The earliest recorded name for the vagina—unprintable here—is still with us today. Testicles (“ballocks,” in Renaissance parlance) received an epithet before the male member (“pin,” 1460), while the most recent addition to the penis thesaurus is “bald-headed mouse” (2012).

The Slate article goes on to provide a choice selection of naughty euphemisms which I won’t copy here but I really recommend going to Green’s two interactive timelines to get the big picture. It took me a while to get the hang of the timeline software but after that I was soon lost in a tidal wave of prurient vocabulary and strong images of a bordello on the frontier catering to scalawags and galoots.

Here’s a handy article on those pesky plastic bottles that we hope to recycle least they reach the perpetual forest lawn of chemicals (somewhere in New Jersey).

The Numbers on Plastic Bottles:  What Do the Numbers Mean 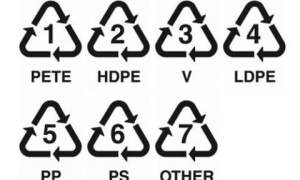 Have you ever wondered what the numbers, or recycling symbols mean at the bottom of plastic bottles and containers? Did you know that, while the use of all plastics should be limited if at all possible, some are safer than others? It’s time to learn a little bit about the various plastics you use and drink/eat from every single day, and what impact they have not only on you, but also the environment.

Every plastic container or bottle has a recycling symbol. The symbol is a number, ranging from 1 to 7, within a triangle. While you may think nothing of these symbols, they can actually offer a great deal of information regarding the toxic chemicals used in the plastic, how likely the plastic is to leach, how un-bio-degradable the plastic is, and ultimately the safety of the plastic.

Information on the various recycling symbols and numbers is only a click away at Nation of Change.