This ironic little news item caught my fancy when I read it on Salon (by Jenny Kutner): 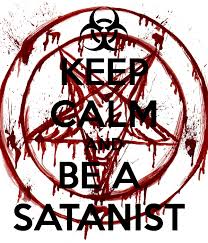 The Satanic Temple, an unlikely and productive ally in the fight for reproductive justice, is following through on a promise to sue the state of Missouri for enforcing antiabortion legislation, which Satanists believe impedes their free exercise of religion. The temple claims that by refusing to grant one of its members, identified as Mary Doe, an exemption to its 72-hour abortion waiting period, the state placed an undue burden on the woman’s religious beliefs in violation of Missouri’s Religious Freedom Restoration Act.

Writing for Orlando Weekly, Satanic Temple spokesperson Lucien Greaves announced on Friday that Satanists filed a petition for an injunction against Missouri Gov. Jay Nixon and State Attorney General Chris Koster, after the exemption waiver Mary presented at Planned Parenthood of St. Louis (the state’s only abortion clinic) was rejected:

END_OF_DOCUMENT_TOKEN_TO_BE_REPLACED

I fully believe that a woman has sovereignty over her own body and that a gang of old white men should keep their meddling misconceptions out of a woman’s way. But I wonder if this is the most efficacious dialogue we can have to support such controversial subjects as birth control or abortion?

We do hear some progressives recognizing that the typical right-to-life advocate is only concerned with promoting life up until birth. After a baby is born it drops off the conservative radar and can undergo any and all pain and suffering, including death, without the right-to-lifers even giving notice.

END_OF_DOCUMENT_TOKEN_TO_BE_REPLACED

Oh Dear, this is being reported from the Bureau of Unintended Consequences with a letter being sent to the Supreme Court thanking them for their short-sighted, politically biased, stupidity.

But before going to the Satanic Temple’s excellent position, I thought I would toss out an idea I have been thinking about lately. When I was a child I loved to get up early on Sunday morning when the house was still cold from the winter night and crawl under a blanket on the couch to watch the one (and only one) NFL game of the week on the television. Yes, in California the football game came on at 10 AM and was over in time for lunch (and then all healthy kids would run out into the street and pretend they were Otto Graham or Norm Van Brocklin). Now I can get football on the television almost any time I want and as a result, I rarely watch football anymore.