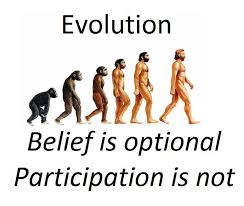 I found one book that deals rather well with the perceived struggle between Christian fundamentalist religion and the science of Evolution. The book is Why Darwin Matters by Michael Shermer. Shermer started as a creationist, was educated in the sciences, and is a strong advocate of not only the undeniability of the theory of Evolution but also for the way natural selection is perhaps a better supporter for religious or spiritual interpretations of life on this planet than revelation and faith.

As Shermer writes: Evolution Makes For Good Theology. His discussion of the evolution of morality is especially convincing and in no way negates religion but rather shows that religion has a firm purpose in our lives .. a purpose that developed naturally along with the other cultural developments that defined the early humans. And Shermer makes his case convincingly using logic, reason and clear evidence, never requiring magic or miracles.

As a corollary to this, Shermer also shows how elements in the history of the evolving species we call man can provide an insight into man’s propensity for violence and brutality, lying and cheating, and still allow for sharing and altruism, loving and nurturing.

END_OF_DOCUMENT_TOKEN_TO_BE_REPLACED

It’s no secret that America has become a Fascist country based on and dedicated to Greed, with Corruption and Mendacity for all.

END_OF_DOCUMENT_TOKEN_TO_BE_REPLACED

“A constant concern with pleasing women eventually turns a man into a woman.”

Read the article at the Daily Kos and learn  all about the next President of the United States, Mike Adams. I would quote more of the article but it really needs to be read in its entirety and allowed to work its magic.

“A constant concern with pleasing women eventually turns a man into a woman.”
by DeadHead

This is so pathetic that I suspect we are being punked. But then again, conservative voices have regularly said stupid things that demonstrate a lack of knowledge and understanding, so this Mike Adams guy might just be for real. After all, he does come from Texas.