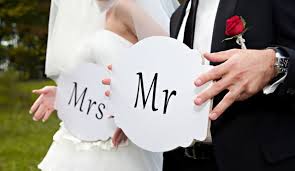 My daughter was married last year and one interesting facet of the exercise was the selection of a post-wedding name that would satisfy both participants. Would she take his name? You don’t know my daughter. Technically, her husband took her name, although they opted for a hyphenated last name: hers-his. What was interesting was that in the state where they resided, she was able to change her official name just by having it printed on the marriage license but he had to go to court to get his official name changed, including paying all the fees.

If you want to point out elements of sexism in this country, consider the state that had no provisions for changing the husband’s name as a part of the marriage. I suppose they considered having the man change his name was just a fantasy.