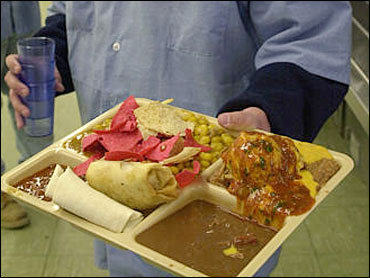 One of the first principles of the Republican Party and most Conservatives is to privatize any industry or endeavor that has nominally been performed by government. The public reasoning they give for this is that the government is doing things they should not do and, thank you Ronald Reagan, the government is not capable of doing as good a job of it so business groups that know how to run a business should take over.

One of the biggest lies of the 20th Century, and one that can be found on stitch-samplers to this day, insists that

Again, thank you Ronald Reagan. Fortunately, much of the country now knows that Ronald Reagan was the problem but is it too late to stop the looming disaster, save Democracy, and overcome the cult of greed which is stealing the American Dream?

Chris Hedges, writing in TruthDig, gives us a small but significant example of how a corporation carefully maximizes its profits at the expense of human dignity (hint: it involves corruption and greed) titled:

Food Behind Bars Isn’t Fit for Your Dog

Shares in the Philadelphia-based Aramark Holdings Corp., which contracts through Aramark Correctional Services to provide the food to 600 correctional institutions across the United States, went public Thursday. The corporation, acquired in 2007 for $8.3 billion by investors that included Goldman Sachs, raised $725 million last week from the sale of the stock. It is one more sign that the business of locking up poor people in corporate America is booming.

Aramark, whose website says it provides 1 million meals a day to prisoners, does what corporations are doing throughout the society: It lavishes campaign donations on pliable politicians, who in turn hand out state and federal contracts to political contributors, as well as write laws and regulations to benefit their corporate sponsors at the expense of the poor. Aramark fires unionized workers inside prisons and jails and replaces them with underpaid, nonunionized employees. And it makes sure the food is low enough in both quality and portion to produce huge profits.

Aramark, often contracted to provide food to prisoners at about a dollar a meal, is one of numerous corporations, from phone companies to construction firms, that have found our grotesque system of mass incarceration to be very profitable. The bodies of the poor, when they are not captive, are worth little to corporations. But bodies behind bars can each generate $40,000 to $50,000 a year for corporate coffers. More than 2.2 million men and women are in prisons and jails in the U.S. …

None of the reports of rancid food or meager portions in jails and prisons around the country affect the growing trend of states and counties turning their food service operations over to private corporations. Aramark has a new $145 million, three-year contract to feed Michigan’s 45,000 prisoners. It took over the prison food service in that state earlier this month. The American Federation of State, County and Municipal Employees, the union representing the 370 former state workers who have lost their jobs there, have protested the privatization. The union notes that the company ran out of food twice within the prisons since it began operating Dec. 8. But Michigan state officials estimate that replacing the unionized workers and using the food service company will save $12 million to $16 million a year. And in our corporate state, where corporations exploit the most vulnerable and siphon off massive sums of public money without outside restraint or regulation, that apparently is all that counts.

For more details on this subject, please go to the original article reprinted at Nation of Change.

In this Holiday season I want to emphasize a point Hedges makes: prisons are becoming profit centers and the best way to increase the profits of the corporations which operate or support the world of incarceration is to assure that there is a steady stream of customers pouring into the prison system. So bribe a few politicians, get a few self-serving laws enacted, increase the pool-size of potential convicts, increase the amount of time each convict will be behind bars … then pay the prison employees as little as possible, put the physical prison on an austerity track extending or eliminating things that do not contribute to the profit like maintenance, cleanliness, vermin elimination, environmental comfort, and especially food. Then sit back and watch the profits pour in and pay yourself an obscene salary for being an American Patriot.

Just for some added irony, let’s allow the CEO of Aramark to counter these accusations with a small piece from the Aramark website:

TODAY IS A BRAND NEW DAY
Today, we are revitalizing our Aramark brand. Our iconic red star continues to represent our people, always moving forward with devotion and ingenuity. Our service mission remains intact: to enrich and nourish lives. And our standards are still just as high. Today, we turn boldly to the future and look to the next era of creating innovative solutions for tomorrow’s challenges. Because passion is at the heart of our performance, and pride is at the core of our service. And it always will be. This is the Aramark legacy. And this is what we do.